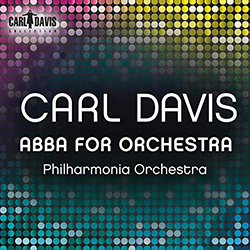 18 Classic ABBA songs performed by the Philharmonia Orchestra with Carl Davis as conductor.

Abba 1974 –1982: I am dating this CD not from when the four members met and began to collaborate and love each other but from the year that they triumphantly won the Eurovision Song Contest. It was then that they gained the attention of European music lovers and eventually the rest of the world.

An early addict of Eurovision, I saw the broadcast that night and admired the cleverness of the arrangement, intrinsic with the composition as well as the sheer cheekiness of their presentation. Forty years later, their music lives on. When Jessie Stevenson, Chris Egan and I planned the album, I took further soundings from colleagues and friends. “You know, I have a Beatles for Orchestra CD and a Bond for Orchestra as well. Now I have made an Abba for Orchestra CD.” A crash of cymbals, increased pulse rate and a moistening of the eyes. There was an expression I have seen only when I mention bullfighting to a Spaniard. What is it that brings on that special reaction from so many folk? I think it is a combination of elements that produced such a unique result. I’ll try to break it down. Of primary importance is the repertoire, all purposely conceived for the group by composer Benny Andersson and lyricist Björn Ulvaeus. Sweden has a long history of singer songwriters, the best known is the 18th Century composer, Karl Bellman, who sang of alcohol and prostitutes, with deep regret. The compositions of Benny Andersson have a firm classical basis with clear harmonic progressions, dazzling and accurate finger work knitted together by a rock solid rhythm section and those gorgeous melodies. What alchemy was required to join up those tunes with apt lyrics from Björn Ulvaeus especially as English was not his first language? The greater burden of singing these melodies fell upon the two female vocalists, soprano (Benny’s words) Agnetha Fältskog and mezzo-soprano, Anni-Frid Lyngstad. All four were practised performers and had recorded before they met. That all-important night in Brighton bespoke a confidence that only years of hard work could produce. The combined voices of the two women shone out, sometimes like trumpets and sometimes sad with deep pain. At times the close harmonies resembled Phil Spector’s “Wall of Sound”, although Benny is quoted as being influenced by The Mamas and the Papas.

The third factor and most important…luck! Just as the Beatles had Brian Epstein and George Martin to shape their career, so Abba had Stig Anderson to steer theirs. After the breakup of the group, they all continued their separate careers (Agnetha released a critically praised album in 2013). The whole Abba catalogue just won’t lie down, with the Abba Gold CD and the global triumph of both the stage and film version of Mamma Mia.

Given that in our technological age the original tracks are immediately available, I thought it was valid to create purely instrumental versions and reveal the great qualities of the songs of Andersson and Ulvaeus with a large symphony orchestra in tow: the magnificent Philharmonia.

2014 sees the release of the third CD dedicated to the phenomena of three important 20th century (mostly) pop song catalogues: The Beatles1962 –1970, the Bond films 1962 – onwards and Abba 1974–1981. Always as much interested in pop music and jazz as the classics, when my conducting career took off, I programmed my favourite pop material generously. With the advent of downloading, I thought to record a new and ingenious take on them. New arrangements could throw a new light on the beauty, verve, the originality of the melodies and striking harmonic progressions, the attack of the fast numbers and the dark sensuality and sensitivity of the ballads. From the first breakthrough hits, The Beatles’ Love Me Do, Monty Norman’s theme for Dr No the first James Bond film and Abba’s Waterloo, it was clear that in each case we were breaking new ground and the world welcomed and relished every new release thereafter. The Beatles and Abba wrote, composed, and performed their own material. James Bond is in a different category, being a seemingly endless series of spy thrillers and scored by many composers (although John Barry dominated its first decades). Abba in all its loveliness just rolls on and on.