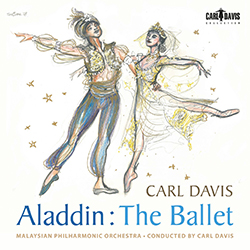 I would first of all, like to welcome this recording into the Carl Davis Collection. It has proved pivotal to my career in the world of dance and has a story I think worth telling.

Aladdin was commissioned by Scottish Ballet, who gave the premiere at The Edinburgh Festival Theatre on 20th December 2000. Sometime in the mid-1990s came the dream phone-call – Robert Cohan, American choreographer and founder of the London Contemporary Dance Company asking if I would be interested in composing a score for a full length ballet on the subject of Aladdin, for what is the traditional Nutcracker slot, Autumn and Winter. The commission was from Scottish Ballet, then traditionally managed by the distinguished Russian ballerina, Galina Samsova. Would I? – You bet! The story was familiar to audiences from pantomime but the source, Scheherazade: 1001 Nights, revealed deeper levels; a Persian story set in China with an important interlude in Morocco. Lots of magic – the lamp, the ring, a flying carpet, split-second set and costume changes. Every aspect of the story suggested a dance. The strong characters, the roguish but ambitious Aladdin, the power crazed and sinister Magician and the dreamy Princess who will reveal great courage. On the one hand there are extended pure dance sequences: the cave of jewels is a set of virtually independent solos, the Court entertainment and several soli and pas de deux and the Princess. The Chinese and Near-Eastern elements can be suggested by, on the one hand, melodies based on the Chinese pentatonic scale and on the other, the drone and modes of the Indian Raga and what a thrill it is to bring on stage the traditional Chinese symbols for good luck, happiness and prosperity – The Lion Dance and The Dragon.

After the successful premiere by the Scottish Ballet in 2000, the company suffered one of those historic convulsions that frequently occur in the arts world, forced by circumstance to severely reduce the number of dancers in the company and change its style from a classical ballet company to a contemporary dance ensemble. This precluded any further performances of ‘Aladdin’ though a tour for the following season had already been booked. This left me, after a promising start, with an ambitious and long ballet score lying on the shelf. I began a collaboration with the choreographer David Bintley, Artistic Director and Principal Choreographer of the Birmingham Royal Ballet. The result was ‘Cyrano’ (CDC003). I grabbed the opportunity in 2005 of a free week in the diary of the Malaysian Philharmonic Orchestra to do the complete recording of ‘Aladdin’ and, very lightly, suggested to David that he might like to listen to it. He responded almost immediately. “I want to do it, but I don’t know when or where”. In the meantime David had been working with the National Ballet of Japan and he took the project to them. An entirely new and far more lavish production opened in 2008 and was revived the following year. This in turn led in 2013 to a UK premiere by the Birmingham Royal Ballet, a national tour, and a season at the Coliseum Theatre in London. A further production of the Bintley version was mounted in the US by the Houston Ballet in 2014 who toured it to Chicago. 2016 saw its second revival in Tokyo.

Who will ride the Magic Carpet next?