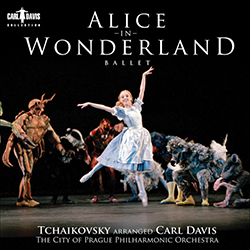 Performed by The City of Prague Philharmonic Orchestra. Music for the Derek Deane Production for English National Ballet

It always begins with a phone call: Derek Deane Artistic Director of the English National Ballet on the line – “Can I some and see you?” “Yeah, great!”

We are old friends and collaborators. First with a one-act ballet based on Oscar Wilde’s The Picture of Dorian Gray created in 1987 for the then Sadler’s Wells Royal Ballet, now the Birmingham Royal Ballet and then later for a Royal Gala to reopen the newly refurbished Savoy Theatre in 1993 commissioned by ENB and choreographed by Wayne Sleep – Savoy Suite.

Derek: “I want to do a full length ballet based on Alice in Wonderland (beat) with music by Tchaikovsky.”

The pause was significant. I had already composed a radio and later a stage musical based on the Alice books which Derek had seen and in that gap I had already fast-forwarded to a fantasy adaptation. But then – Tchaikovsky? How remote was that? I quicky rallied with a thought. Tchaikovsky had composed a suite of 24 short piano pieces entitles “For Children”. What was interesting was that these pieces were composed to be played, not by children, but for children. This meant that each piece had a specific character with a provocative title. Now I had a source of “variations” – ballet argot for short solos.

Thereafter, the colossal output of Tchaikovsky was available for ransacking. First the theatre music, in particular the Hamlet Theatre score: brief regal fanfares and marches for the Danish Court. There was more piano music, string quartets, tone poems, The Tempest especially for the fall andFate for the ominous ending.

There were snatches from the more obscure operas like The Maid of Orleans and we had to have one grand waltz – all Tchaikovsky ballets have one! Tchaikovsky was always accused by his critics of having his symphonies sound like ballets. Why not reverse this and use the waltz from the Fifth Symphony. And the orchestras Suites – what a feast!

There is still the question of linking the very Russian Tchaikovsky with the very English Lewis Carroll and I made a very elaborate rationalisation. English governesses were fashionable at the Czarist Court. Perhaps the “Alice” books, immediately popular on their publication in 1865 and 1871 had found their way into Russian society. Perhaps they had been translated. That led to another search.

Thinking of the global reach of our project, what was the extent of the translation of the books? I took the ENB (always multi-national) as a case in point and obtained a breakdown of the nationalities of the individual dancers. I discovered and later found translations into Spanish, Italian, Chinese, Japanese, Russian and my particular triumph…Estonian for Agnes and Tom Edur. We had a prize day in the studio at a break in the rehearsal. That was just a small part of the list but proved that Alice was global.

I further enhanced this CD with quotes from Lewis Carroll’s original novel to put each track into its context.