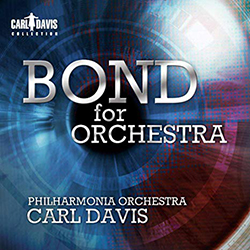 I decided to make this CD an instrumental one. Nowadays the originals are a button-press away on YouTube. A new interpretation would be exciting, especially played by a world class orchestra like the Philharmonia and London’s hottest rhythm section, inspired by the brilliant arrangements and production of Chris Egan. Let’s also add to the mix a classical violin virtuoso, Pavel Sporcl from Prague who moonlights with his own Gypsy band and England’s most stunning jazz trumpeter, now a successful composer and conductor, Guy Barker. With the composers, overshadowing all was John Barry who was involved from the start as arranger and conductor. He moved to centre stage as sole composer with Goldfinger in 1964 and continued to compose and collaborate on Bond scores until 1987 with The Living Daylights. Barry in his orchestration defined the Bond sound: rich, full and brassy. Until Dave Arnold picked up the mantle in 1997 with Tomorrow Never Dies, the exceptions to Barry were one offs, but wonderful ones.

Burt Bacharach, in the much derided Casino Royale mark1, produced a torch song standard with “The Look of Love” . Paul and Linda McCartney worked with their newly formed group Wings on Live and Let Die. Marvin Hamlisch wrote “Nobody Does It Better” for The Spy Who Loved Me. Others included Michel Legrand with Never Say Never Again, Bill Conti with For Your Eyes Only, Bono with GoldenEye and Dave Arnold’s score for Tomorrow Never Dies established him as the John Barry of today.

The total oeuvre comprises a history of music and trends from 1962 until today – a span of exactly 50 years – but Monty Norman’s Dr No theme resembles no pop music before or since. John Barry’s songs are full of the oddest twists and turns. The McCartneys’ ‘Live and Let Die’ is unique in their output. The Bond composers tended to do their most individual work inspired by Ian Fleming’s creation. Long may he be reincarnated to thrill and amuse us with his glamour and wit, his strength and ingenuity.