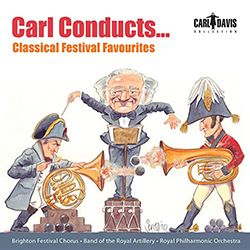 Recorded in 1992 with the Royal Philharmonic Orchestra, one of London’s four great orchestras and the notable Brighton Festival Chorus, I remember trying to nail in one go what is known in musical circles as ‘Popular Classics’. I discovered that the reason they are so popular is that they are great pieces of music, brilliantly orchestrated and focused strongly for the occasion they were composed for, whether a coronation, an anniversary or just plain fun. They form the centrepiece of the orchestral repertoire and I suppose will ever remain so.

After 20 years a back room boy (1960-1980) I had the opportunity to start a new career as a conductor, sometimes in concert halls but more often than not in unusual venues: a circus Big Top on the banks of the Mersey or Thames, before countless stately homes, in ancient Greek or Roman arenas or just an empty space, co-opted into concert use. Here then is my core repertoire.

I had to wait until 1984 to perform Copland’s Fanfare for the Common Man, 400 ex GI’s were returning to Southampton to celebrate the 40th anniversary of the D-Day landings and a concert was requested at the Southampton Guildhall. The Bournemouth Symphony Orchestra engaged me and the celebrated journalist Ludovic Kennedy to devise the evening which would contain two important American works, Copland’s Fanfare and Sousa’s march, The Stars and Stripes Forever, also recorded for this CD. The Fanfare contains in its 3 minute duration everything you might want to know about American music. Composed in 1942 as one of 30 fanfares (and the only surviving one) commissioned by the Cincinnati Symphony Orchestra to support the war effort, the score has all the characteristics of Copland’s public style which he invented. I love conducting it but it is high risk. The opening percussion solo is more effective outdoors as it can cause serious hearing injury to the players and the brass climaxes are even more earsplitting – an impressive way to open a concert.

By contrast Strauss’s famous waltz drifts in on a haze of tremulous strings and that glorious melody played by the principal horn. Hard to think of it now but the Viennese Waltz was thought of in the early 19th century as scandalously erotic, permitting men and women to actually hold each other as they danced. The Strauss family elevated the waltz to the concert stage and it reached a kind of apogee with Stanley Kubrick’s film ‘2001’ when it accompanied the docking of a space ship. It is no joke to conduct, as tradition has made it into a nightmare of rubato, virtually flirting with the listener. In an open air setting where there is room, I often invite the audience to dance, creating an outdoor ballroom, on one occasion numbering 16,000 dancers. The Blue Danube Waltz is Austria’s equivalent to ‘Auld Lang Syne’. I fondly remember a New Year’s Eve in a small Austrian village, the bells of St Stephen’s Cathedral ringing at midnight, the dancers of the State Opera in position (all on TV), the front doors opened on to a snowy landscape and the whole population waltzed out into the night.

Even opening my score brings some amusements when the dried remains of river insects drop out. Once conducting the Blue Danube on a platform projecting out over the River Thames, strong floodlights encouraged a cloud of insects, attacking the orchestra. The wind and brass were choking every time they inhaled and the principal 2nd violin stood up and piteously held his instrument towards me announcing, “This is a Stradivarius and there are greenfly in its F holes”.

Writing about anthems, Finland treats the lyric theme of the Sibelius tone-poem as if it was one, being so strong and intense. Composed in 1899 to accompany a tableau vivant, it depicts the Finns crushed under the weight of Russian oppression and their struggle for independence. Sibelius himself created a vocal version with great success and the theme spread around the world. I ‘ve used the text as sung by the Mormon Tabernacle Choir ‘Oh, mighty land.’ Finlandia is a work that moves in mood from darkness to light. It is a joy to conduct.

If Johann Strauss Jr. was the Waltz King, then John Philip Sousa was the March King. Writing almost exclusively for military band, Sousa’s marches have been constantly
performed with their spirited tunes and jocular solos (I am referring to the brilliant piccolo solo in Stars and Stripes). The Liberty Bell March engrained itself in the world’s musical psyche as the opening and closing title music to Monty Python’s Flying Circus but The Stars and Stripes is something else. Extended concert marches, like waltzes, are made up of a chain of individual melodies with the principle one reprised very loudly and positively as a finale and in this case every one of them is a winner. I couldn’t resist adding one last reprise, perhaps imagining high-stepping Rockettes.

This stunning chorus from Verdi’s 1842 opera ‘Nabucco’ came quite late into my musical life. I first heard and played it at rehearsals for an album of operatic choruses, sung by the Robert Shaw Chorale in the summer of 1959, a few months before leaving for Europe and eventually the UK. At that time the early operas of Verdi were hardly touched by American opera companies and even hearing this wonderful composition was a rarity. The emotional impact it made on me was enormous and when in later years I had my chance to involve a choir in my concerts ‘Va, pensiero’ was my no.1 choice. First of all there is the expansive melody with its dramatic leaps sung in unison, the dense choral harmonisation of the central section, the unusual key of F sharp major, all the black notes on the piano, the chorus ending in a hoarse whisper, truly one of Verdi’s ‘greatest hits’.

Our second Strauss composition on this CD and my number one choice to play for fireworks displays. It is unrelentingly cheerful with lots of sharp contrasts, roaring bass drum solos, crashing cymbals and demands to be played fiercely fast. Almost over before you know it, it makes a strong encore or a refreshing interlude on your musical menu.

Commissioned in 1880 to commemorate Napoleon’s retreat from Moscow, Tchaikovsky ingeniously blends three given elements into a fairly cohesive whole. Opening and reprised in the finale is an ancient Slavonic prayer for the health of the Tsar, then France’s national anthem, the Marseillaise, in a crossfire of counterpoint and lastly the Russian national anthem. It was composed with spectacle in mind and perfect for outdoor performance. Aside from a large symphony orchestra, the 1812 Overture calls for cannon fire, very precisely notated, a full carillon of bells and a military band. I have taken matters a few steps further with the incorporation of a large choir doubling the opening prayer and finale as well as a concert organ and of course the fireworks. This wide range of forces is an accident waiting to happen. Outdoor concerts are hostage to the elements – a strong wind wreaks havoc with a sound system as amplification is a must. In addition, the air may fill with flying objects from rubber chickens to lit fireworks blown by a rush of wind onto the orchestra and public. I recall an occasion when after holes were burnt in the timpani and players had their hair singed, facing my all female percussion section wearing white safety helmets. Change of wind direction can render the entire orchestra invisible, veiled in an acrid fog of yellow gunpowder and fumes from the hamburger and kebab stalls but Tchaikovsky’s score never fails to impress and always provides a stirring climax to a classical pops event.

If you were a contestant on a quiz show and asked to name a favourite chorus, it would probably be this one. Arriving at the 2/3 mark in Handel’s oratorio, ‘The Messiah’, it must be the most popular chorus in the whole world. I first sang it in my New York High School. I think I once conducted it there as well, replacing an indisposed music master. My first professional contact with it was during a tour of the US and Canada with the Robert Shaw Chorale in 1955-56 who performed it as the fourth item in a group of popular choruses. On these tours, from East to West Coast lasting several months we invariably encountered what was to me the unusual practice of the audience standing for the ‘Hallelujah’. It was originated, apparently by King George III who rose to his feet at an early performance and the practice held. Orchestrations vary considerably from Handel’s original to Mozart’s larger band to a late Victorian one by Ebenezer Prout. There are records of a version performed at Henry Wood’s Promenade Concerts involving harps and elaborate percussion but no matter, it is top drawer Handel and thrilling to perform whether indoors or out.’

Premièred in Liverpool in 1901, this march and Jerusalem that follows it form part of a package of works one can only describe as broadly patriotic. Elgar consciously set out to compose a ‘hit’ and it was and is. It only increased its success once a text was added, ‘Land of Hope and Glory’.

I combined both on this recording and there is no greater crowd pleaser and spectacle with a public well equipped with Union Jack banners, hats, and scarves. I’m the one who gets the treat as I invariably turn to conduct the audience in Elgar’s mighty melody and face a barrage of colour and sound.