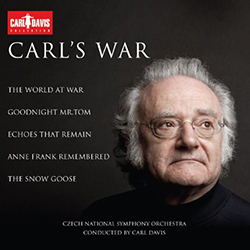 The television theme was composed in 1972 after Jeremy Isaacs’ (the Producer) statement of intent for The World at War series: to express the experiences of the individual people on the ground, in occupied countries, in U-Boats and in the air etc. The spread was global, but I needed a focus and chose Czech music as my inspiration, those sudden shifts from major to minor and back again. But, fifty odd seconds is too brief for concert performances and I incorporated a march, jolly at first, but later menacing, used in the series for the advancing German army. A reprise of the opening theme, on a mandolin follows and then the material is repeated, used as each episode ends.

One of the staples of ITV’s Christmas viewing and a best selling DVD, Jack Gold’s production of Goodnight Mr. Tom (1998) has a traditional film score supporting the various moods of the drama. I divided the score into four movements:

i. Arrival
The arrival of the evacuees into the village, the selection and young Willie forcibly housed by a surly but enigmatic Mr. Tom. The boy expresses some strange phobias and Mr. Tom is sympathetic.

ii. Going Fishing
Mr. Tom introduces Willie to some pleasures of the countryside, i.e. fishing. He then discovers that Willie is illiterate, lessons follow and it emerges that Willie has a gift for drawing.

iii. Return to London
Willie returns to London to see his mother. Mr. Tom grows anxious at the lack of communication and searches for him through the ruins of the East End. He finds him in a closet holding the body of his baby sister. They return to the country.

iv. Finale
Mr. Tom formally adopts Willie and reveals his secret, the loss of his own son. In the joyous finale, Mr. Tom teaches Willie to ride a bicycle. The suite ends with a reprise of the reading and writing theme.

The Award winning Echoes that Remain is a selection of music cues from the documentary commissioned by the Simon Wiesenthal Foundation and directed by ex-Londoner, prominent designer, author and director now based in Los Angeles: Arnold Schwartzman. The score is ninety nine percent minor key and follows the memories of village life in pre-World War II Eastern Europe, the markets, the Sabbath, the holidays and games and eventual abandonment and exodus.

Jon Blair’s epic 1995 documentary ends with an amazing film clip, how on earth it was discovered is one of those miracles of film research, we see an apartment block in Amsterdam, the camera pulls up from a bride and
groom emerging through the front door to a balcony onto which runs… Anne Frank, unmistakable. She and her family were curious neighbours. The documentary has as well unique footage and testimony from people who witnessed the story from the discovery by the Germans through to the tragic end of Anne’s life. The three movement suite follows the shape of the film.

i. Disappearance
Kol Nidrei, the flames of the death camp furnaces, a tranquil childhood in Amsterdam, the ominous rumbling of anti-Semitism, the invasion and subsequent disappearance of the Frank family.

ii. Attic
Anne’s Theme, something rather elusive, floating, dissolving into a Laendler-like waltz (Anne can see a flowering Horse Chestnut tree from her attic window), a sense of being trapped, hope: the RAF bombings a possibility of liberation but then?

iii. The Death Of Anne Frank
A few fragments of Anne’s Theme, then a full statement growing bigger and bigger as if the message of her life cannot be ignored.

Paul Gallico’s novel was the basis for this adaptation, starring Jenny Agutter and Richard Harris. The director was Patrick Garland, a key colleague in the late 1960’s with his West End production of Alan Bennett’s first stage play, 40 Years On for which I created the score. After The Snow Goose, I composed a score for another of Patrick’s productions, again for Universal, The Cay. The plot of The Snow Goose concerns a young girl, Fritha, who saves an injured bird and brings it to a local artist, Philip Rhayader. Together they nurse it back to health and develop a friendship. To their regret, the bird flies off and the bond is broken. Years pass, the bird returns and with it their relationship. However, the final chapter is not happy, World War II is declared and Philip sails his small boat into the Channel as part of the Dunkirk retreat. He never returns but the boat drifts back and over it hovers The Snow Goose. The score was my first major orchestral commission. Large by television standards, it involved 36 players. It was a long score and for an EMI LP in 1979, I extracted two movements for full orchestra. However,I thought it could be developed further – there are many contrasting themes and a strong story to base it on. A literal clinging to the plot was not necessary, musical logic more important. The principal themes are:

1) a slow modal melody for the bird, rather like a Scottish ballad, in E Minor.

2) a hearty theme in B Flat for the village and village life.

3) the approaching war, at first restrained but then growing stronger and even battering on repetition, climaxing on the Dunkirk evacuation.

4) and finally, in a warm D Major, the ‘love’ theme, Fritha and Philip, but never expressed fully.

After shooting and editing the film and during the composition of the score, the producer made a request which exemplifies one of the dilemmas a film composer can face. After realising that the child Fritha, at the start of the story, reappears several years later, all grown-up, and in the same costume (i.e. blue jeans)….’Carl’, he pleaded in desperation, can you put a dress on her?’ ‘Strings!’ I replied. ‘Carl! You put a dress on her.’