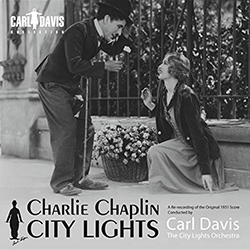 A Re-recording of the Original 1931 Score
CATALOGUE NUMBER: CDC015

Re-issue of the recording of Chaplin’s ‘City Lights’

March 1989 saw a seismic change in the world’s perception of Charlie Chaplin’s work in the cinema with the first live screenings of his masterpiece ‘City Lights’ in London at the Dominion Theatre. I had painstakingly transcribed Charlie’s original score recorded in 1930, for performances with orchestra. Within days requests were being made for performances in such diverse locations as Los Angeles, New York, Atlanta, Liverpool and Edinburgh. Many more followed and other conductors took up the mantle. After a year or so of continuing demand I suggested to my colleagues at Photoplay that they asked the Chaplin Estate if we could continue the exercise. Eventually ‘The Gold Rush’ (in its 1925 cut) and ‘The Kid’ followed. But ‘City Lights’ was special – who can ever forget the final scene, musically worthy of Puccini. As I begin over 20 years later another round of performances I look forward to conducting music that, like the film, plunges from the heights of irresistible comedy to extreme pathos. Charlie, you taught us all.