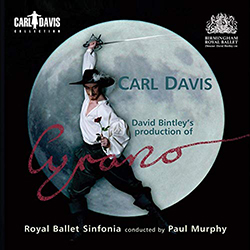 MUSIC FOR A CYRANO BALLET

Reading plays was my number one favourite thing to do in childhood. I staged them in my mind. Cyrano was on the family bookshelf and I was repeatedly drawn to it. Although I saw the 1950 Hollywood film starring Jose Ferrer and the stunning 1990 French production with Gerard Depardieu, live stage productions and David Bintley’s earlier ballet slipped past my radar. But in 2004 when the offer to compose a new score for David came (through the magical midwifery of Faber Music’s Sally Cavender) memories, not so much of the films, but of my childhood stagings came flooding back. I had one niggling doubt – the subject of the play is eloquence, i.e. words. Can words be translated into movement? David, through gesture, immediately convinced me that it can and we were off!

Form – of my three full-length ballets, Aladdin, Alice in Wonderland and Cyrano, this bears the strongest relationship to the dramatic scores required forthe silent cinema. But now the long paragraphs to parallel the vivid scenes on the screen must be dance, and yet continue to drive the narrative forward.Autumn 2004 to Winter 2006 were bad health years for me. Parts of Acts II and III were composed on a board supported by a plaster cast on my left leg! Consultation with David was intense – much re-writing and compressing, lengthening. Also, getting to understand each other’s working process. And then, the final thrill – seeing the first steps to my music. Downtown Brooklyn to Birmingham Royal Ballet and the circle was complete.