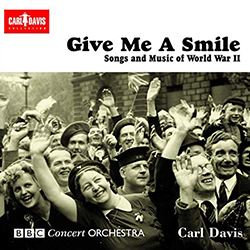 70 years ago, from June to October, the German Luftwaffe tried to bomb Great Britain into submission. It never happened. British courage and resourcefulness triumphed. These events are celebrated in music and song on the latest release from the Carl Davis Collection. Here are the songs people sang, the film scores they loved and heard on the radio. A brilliant cast of soloists together with the BBC Concert Orchestra and The Brighton Festival Chorus play and sing their hearts out just as people did in 1940.

In the six years of global war, the widest possible range of actions and emotions were experienced and reflected. There was a nostalgic revival of popular songs of World War I, i.e. I’m Gonna Hang Out The Washing On The Siegfried Line, Keep the Home Fires Burning and Lili Marlene. Films depicted the bombing of Warsaw and the dangerous exploits of the RAF, resulted in the Warsaw Concerto and Dambusters’ March. Post-War action films relived building The Bridge on the River Kwai (Colonel Bogey March) and the D-Day landings in France in Saving Private Ryan (Hymn to the Fallen) and the songs… each has a place in the history of World War II from Goodnight Children Everywhere sung on the BBC each night to the evacuated children, to the longing for reunion with loved ones (The White Cliffs of Dover and We’ll Meet Again). We hear stubbornness of spirit in Bless ’em All and Noel Coward’s London Pride, as well as yearning for the war to end in When The Lights Go On Again and When They Sound the Last All Clear as well as the uproarious I’m Gonna Get Lit Up, banned by the BBC for its celebration of drinking. Radio encouraged cheerfulness with repeated playing of Litolff’s Scherzo and Wish Me Luck was the ultimate song of departure.

I conceived the album in the format of a show in three acts with a large cast. The First Act (Tracks 1-6) refers to the defiant mood of the beginning of the war. The Second Act (Tracks 7-12) has a sense of the war grinding on without much movement and the final Act (Tracks 13-18) feels like the end is in sight. It peaks with the rather jingoistic There’ll Always Be An England, however, I decided to end thoughtfully with John Williams’ moving Hymn To The Fallen.

For me, these songs are part of the emotional furniture of the war, like coming upon the occasional uncleared bomb site and poppies floating down from the dome of the Royal Albert Hall on Remembrance Day. I spend a lot of time looking for musical bridges to my audiences and in this music I definitely have found one.