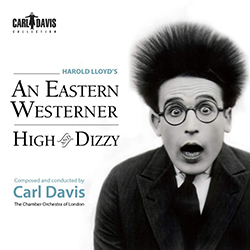 In 1920 Harold Lloyd created no less than five short films (two-reelers) which included ‘An Eastern Westerner’ and ‘High and Dizzy’. His leading lady, Mildred Davis, was soon to become Mrs Lloyd. The two films could not be more contrasting: ‘An Eastern Westerner’ opens in New York with Harold as a dissipated young man enraging his parents who banish him to their ranch in an un-named outlaw-ridden territory. ‘High and Dizzy’ couldn’t be more urban, moving from a doctor’s office to a very grand hotel. But running through this film is a very serious theme. The heroine is a sleep-walker and at the film’s climax places both herself and Harold in great danger.

Even the orchestrations are different. ‘An Eastern Westerner’ was composed in 2000 as a curtain-raiser to Harold Lloyd’s thrill feature, ‘Safety Last’, for an orchestra resembling the Paul Whiteman Jazz Band. Even when imitating Western themes I used the orchestra to emphasise Harold’s split personality. ‘High and Dizzy’, composed in 2012, has a more classical line-up utilising a beautiful aria from Bellini’s opera ‘La Sonnambula’ (The Sleepwalker). Following silent film tradition I borrowed copiously from the masters including Rossini’s ‘William Tell Overture’ and Wagner’s ‘The Ride of the Valkyries’ as well as the most iconic Western song of all ‘Home on the Range’ which both opens and closes the film.

An Eastern Westerner
Track 1 : City Dweller
Opening with ‘Home on the Range’ we anticipate the nightclub scene before meeting Harold’s disapproving parents with a depressing march. The nightclub scene alternates wild ragtime with more disapproval, this time from Harold’s inability to stop shimmying. He is ejected, returning home at 2am, receives his marching orders, and heads West.

Track 2 : Arrival and ‘Tiger Lips’
The first appearance of ‘William Tell’, a theme forever associated with ‘The Lone Ranger’ as I remembered from my childhood addiction to the U.S. radio series. We now meet the villainous owner of the local saloon with a brusque theme.

Track 3: The Girl
Our heroine appears with her ailing father. Her theme has an Irish feel to it. Simultaneously Harold arrives by train. His music is optimistic although he is treated roughly by the local cabbie. Tiger Lips agrees to employ the girl and her father but it is obvious that his intentions are far from honourable.

Track 4: First Meeting
Harold is tossed into the dust but ingeniously uses a horse’s tail to brush his suit. The Girl finds him uproarious but Harold finds her attractive.

Track 5: Lasso Practice
A passing cowboy practices his lasso stunts and Harold attempts these to a folksy waltz. More tricks follows on horseback to ‘William Tell’ but again Harold fails miserably. How can he impress her?

Track 7 : Card Tricks
More country-style music accompanies Harold’s gambling ambitions but though he is successful he relinquishes his winnings at gunpoint.

Track 8: Father Rescued and ‘Angels’
Harold tricks Tiger Lips, and leaves with The Girl. Tiger Lips summons the ‘Angels’, a parody of D W Griffith’s Ku Klux Klan scenes from ‘The Birth of a Nation’. Griffiths’ composers suggested ‘The Ride of the Valkyries’ and so do we – but played by a jazz band.

Track 9: Evasions
In a sequence of brilliant evasions Harold tricks the ‘Angels’.

Track 10: Rolling Barrel and Finale
The barrel Harold is hiding in splits and the ‘Angels’ pursue him. The Girl follows the horsemen to the railway station but Harold seems to have gone. To the strains of ‘Home on the Range’ the couple are reunited and Harold draws a wedding ring on her finger.

High and Dizzy
When I first saw ‘High and Dizzy’ I immediately thought of using one of my favourite Bel Canto arias, ‘Ah! Non Credea’ from ‘La Sonnambula’ . In Bellini’s opera the heroine in a trance walks across a perilously frail bridge. The Bellini theme perfectly expresses her state of mind. I open the film with it and when The Girl appears at various points in the film, reprise it.

Track 11: The Sleepwalker and Office
After the opening titles utilising Bellini’s aria we find Harold playing a rather unsuccessful doctor waiting impatiently for the phone to ring. His patient is our sleepwalker accompanied by her father.

Track 12: Examination
The father explains his daughter’s condition but Harold flirts instead of listening. The father is outraged and he and his daughter leave a depressed Harold.

Track 13: Old Friends
The music turns bluesy and an old friend appears from a neighbouring office. He is operating an illegal still and while the two taste the brew, it explodes. The music goes Hungarian as the pair drink the entire stock. From this point to the end of the film Harold is colossally drunk. The pair emerge onto the street staggering and engage in a variety of encounters.

Track 14: Pole Dance
To a rollicking waltz, Harold rescues his friend from bondage after buttoning his coat around a pole and an in-or-out of a taxi routine. They move on.

Track 15: We Need a Room
A touch of the Bellini as the Girl and her father enter their hotel suite. Harold and his friend enter the foyer of the grand hotel. A solo violin and piano evoke a Palm Court orchestra as the two inebriates attempt to get rooms but are ignored. Finally, they take some keys at random.

Track 16: Elevators
Harold tries to cope with an elevator but some aggressive guests hamper him. Finally, he is pushed into the lift.

Track 17: Collapsed
The friend is collapsed in front of his room (more blues). Abandoning him Harold finds his own room. There is business with a key, a puppy, and a mirror. Finally, we hear Bellini’s melody.

Track 18: A Dangerous Walk
To the great aria the Girl, sleepwalking, opens the window and walks out onto the high window-ledge. Harold, still drunk, sees her and follows her out. After walking to and fro she returns to her room but locks the window leaving Harold outside. As the theme is repeated forte he realises his predicament. Finally, he finds his way back into the room but the Girl is in bed!

Track 19: High and Dizzy Finale
She panics but then Harold proposes and finds a Parson on the floor below. All ends happily with the Finale ‘Ah Non Giunge’ from ‘La Sonnambula’.