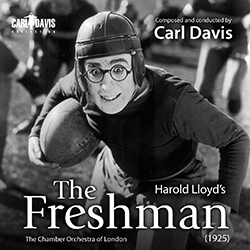 Composed and conducted by Carl Davis

‘The Freshman’ in my view is a large scale film and benefits from a grander orchestration than the small ensembles generally used to accompany ‘silent’ comedies. In this 2013 draft (my third) I employ an orchestra of forty which would encompass music for the sport stadium scenes as well as a large scale college dance and various crowd scenes. It also underpins the emotional heights and depths of the leading character, a ‘Harold’ with an obsession of being ‘popular’. As football is the means he will use a football theme is essential and, with its patriotic associations, a march. The popularity theme signals the jazz age and a love theme, minor key music for the college bully as well as a school anthem fill out the rest.

2. Home
The school anthem is softly heard as Harold’s parents discuss his ambition to go to college. He has scrimped and saved and now his dream has become a reality. The football theme intrudes. Harold is practising his cheerleader routine, shaking the house. He explains his strategy to his tolerant parents. Modelling himself on a recent movie, he has copied a goofy dance routine which he is sure will be a winner. A fast Charleston, even Dad has a go.

3. Fall Term
Once a dream, now a reality. To a fuller version of the college anthem, the campus fills with students. We meet the rather doddery Dean and the School Bully, later to become Harold’s nemesis.

4. An Old Fashioned Girl
Introducing Peggy as the kind of girl you could take home to Ma. A sentimental waltz is required. Very important is that Peggy is not one of the privileged college folk, but a working girl, come home to help run her parents rather down-at-the-heels boarding house. Of course it’s love at first sight.

5. Arrival
The train pulls in at the college station and Harold and Peggy disembark separately. Chet, the most popular boy, arrives as well and is warmly greeted, observed by Harold. He tries out his little dance, watched by the Bully, who senses an obvious target. The music darkens as he misdirects Harold into taking the Dean’s limo to the assembly hall.

6. Tate Auditorium
The entire college assembles for the opening day speeches. Harold arrives in the Dean’s car and is deposited back stage. He hears the cry of a lost kitten. Going to the rescue, he finds himself on stage as the Bully raises the curtains. Concealing the kitten under his sweater, he clowns around, falling off a high stool, stumbling upon a ukulele and dealing with his suitcase which scatters his belonging across the stage. The students roar approval and the Bully insists he makes a speech.

7. A Speech and a Kitten
To the rhythm of a slow Laendler, Harold introduces himself. He is toying with a rapier, inserting it into a live socket, shocking himself (hence the loud chords). The mother cat calls to her offspring who crawls up Harold’s sweater, re-appearing at his neck. The students are convulsed and Harold gets into his stride (the popularity theme) and invites them all to the ice cream parlour. Outside, the crowd grows and Harold’s reputation is made. Oh, and the kitten is reunited with its mother.

8. Living Quarters
With his rapidly diminishing savings, Harold rents a shabby room (a bleak piano solo). Brushing out kitten hair, he observes a very cloudy window magically clearing and to his delight, it’s Peggy! It is indeed her family’s boarding house and she is helping out. The waltz theme heard on the train is reprised as they chat. In a charming scene Harold cuts buttons from his shirt so that Peggy can sew them back on.

9. The Tatler
Harold’s extravagance has hit the local press and his popularity dream begins to unfold as Peggy observes. But he cannot unseat Chat. The Bully suggests the route to absolute popularity lies in joining the college football team.

10. Football Practice
A new, rather galumphing theme featuring the saxophone now appears characterising the Coach. After a pep talk, there is a knock on the door, a Wagnerian climax and Harold enters in full football regalia. He asks to join the team, performs his little dance and kicks the ball over a distant fence. Furious, the coach orders him to retrieve it.

11. A Mad Dog and a Human Dummy
A violent dog attacks Harold who ingeniously evades him, retrieves the ball and returns to torment the coach. Harold now tackles the dummy so violently that it is dismembered. The Coach orders him off the pitch but Chet suggests Harold stands in for the dummy (the dream theme moves up a notch). The football theme now takes an Elgarian turn with a lyrical second section. Harold puts up with brutal tackling until he is knocked into a cellar door. Will he quit? No, he can take it.

12. Taken On!
To a weary blues, Harold stumbles in and, to the amazement of the Coach, is enthusiastic about his day. Chet encourages him to keep Harold as the water boy but not tell him. Harold, in terrible pain, remains positive but signals a passing ambulance. Meanwhile, at a hotel where Peggy is working, the Bully reveals the scam to his friends. Peggy defends Harold from them to a passionate version of their waltz.
Once more the blues. Harold crawls home and tells Peggy the ‘good news’. She is discreet and congratulates him.

14. The Tailor
Harold’s choice is limited by his ever diminishing purse. Musically I have made the tailor East European. He has many problems, a large family and a propensity to faint, saved only by a swallow or two of brandy. Harold is very nervous, his guests are already arriving and the suit is not ready.

15. In Full Swing
Announced by the college fanfare, the dance begins. The orchestra has become a 9 piece jazz band and plays a brisk foxtrot. But back at the tailors, Harold’s suit is still incomplete – just lightly tacked. The tailor insists on accompanying him to the dance so as to make repairs as required and they dash out. The tempo increases accordingly but suddenly stops. Harold has spotted a florist and buys a bouquet. Once more the waltz theme as we jump cut to Peggy, now the hat check girl, receiving the flowers. The Bully orders a fanfare from the band and congratulates Harold. But one strong gesture and the suit starts to disintegrate.

16. Summoned by Bell
The tailor has evolved a signal, a bell, which he will ring if he sees a tear in the suit. The following sequence consists of short episodes in which Harold mixes with his fellow students, chatting, flirting and dancing as the tailor tries to contain the damage. Finally the tailor succumbs to the stress of it all and Harold rushes out to find some brandy.

17. Hip Flask
Moving through the dancers, Harold manages to pinch a flask. But as he heads back to the tailor he spots Peggy forlornly playing ‘He loves me, he loves me not’ with one of Harold’s flowers. The Peggy theme develops with their growing intimacy and ends with a kiss.

18. Goodbye Trousers
The party is at its height, the band is hot and Harold is in real trouble, losing more and more of his suit as the tailor, stitching away, is dragged along with him. Finally the trousers completely fall apart and Harold has to make a run for it.

19. Crisis
Crouching in a phone booth, Harold sees the Bully amorously attack Peggy. Seizing a pair of trousers from a conveniently passing porter, Harold hits the Bully really hard. The Bully comes clean and reveals the truth – the whole college thinks he is a fool and are all laughing at him. Even his little dance is caricatured. Harold seems resigned to this but then collapses in Peggy’s arms. She, while sympathetic, will have none of this. To the strongest statement of her theme yet, she tells him to be true to himself. He takes courage. “There’s just one chance left”. And he storms off.

20. The Day of Days
Harold’s great day has come. To the march that opened the film we see the packed stadium, cheerleaders, the whole college, Harold’s parents, Peggy and her mother and the Bully and his set. Things are not going well for the home team with many players going down. At one point Harold thinks he has a chance to play but he was called only to replace a torn sweater. He is resigned (the blues) but at last he is the only man left. However the Coach won’t allow him to play. But Harold is defiant and makes a passionate plea (Peggy’s confidence theme) and the Coach reluctantly agrees.

21. Exhortation!
Harold plunges on the field taunting his team into action. At the very first huddle, Harold is flattened and carried off but immediately returns, groggy with double vision. Crushed again, he runs with the ball, but it is the Dean’s hat.

22. Final Skirmish
A sequence of hilarious gags: Harold wrestling with the umpire, mistaking a balloon for the ball, unlacing the ball and using it as a lure, ending with being at the bottom of a pile up with one minute to go.

23. Finale – The Freshman
His last chance – he runs and runs pursued by his opponents. All fall on the line. When it clears Harold is revealed with a broad chalk stripe across his face. The ‘popularity’ theme is played at maximum strength, Harold is the most popular man on the campus. Peggy sends him a note as he is carried away by his fans. Alone, in the shower room, he reads “I love you”. Harold, thrilled, leans back and turns the shower on himself. Fade out.