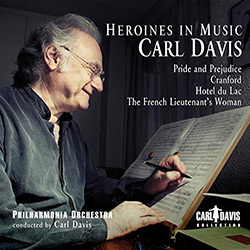 Carl conducts his all time romantic themes, including Pride and Prejudice, Cranford, Hotel du Lac and The French Lieutenant's Woman

In 1978, EMI Records released an L.P. entitled Music for Television featuring scores for dramatisations of four novels and in 1981 released another, The Commanding Sea with two more novels.

The degree of public interest in seeing their favourite novels made flesh, with all their bizarre characters, picturesque settings and intricate plotting, puts contemporary soap operas to shame. An unashamed novel reader since childhood, certainly one of the ties holding me to England, now 50 years strong, has been (since the 1970s) a chance to compose music for films, TV series and dance based on novels.

In this selection of what is now a fairly massive catalogue, I have focused on the ladies: first the central role of Sarah, superbly portrayed by the young Meryl Streep in her first starring film role. The score won both a BAFTA and Novello Award in 1981.

The following three scores form a tribute to the little-recognised importance of the producer of these projects, i.e. the person who makes the phone call to say ?Do it!? In this case, the calls were made by Sue Birtwistle for Hotel du Lac (1986), Pride and Prejudice (1995) and Cranford (2007) and The Return to Cranford (2009).

Sue is totally creative in her approach. If there is a dance, she will dance, and she really can play all the hymns and dances. A lasting memory is watching her whirl around my small sitting room in Chelsea in the arms of the choreographer, working out the waltz finale of The Return to Cranford. Bravo and thank you, Sue.

In 1981, Karol Reisz, the distinguished Anglo-Czech director invited me to work on this prestigious project based on John Fowles?s best-selling novel, script by Harold Pinter and starring two hot young talents, Meryl Streep and Jeremy Irons. I was very excited and then challenged as the film was complex, with shifts from a highly sexually charged Victorian melodrama to the contemporary story of actors making that film whose lives paralleled the plot of the film. The score dealt primarily with the film within the film. I made several false starts, but Karol was patient with me. After my second attempt, the first one stormy and tragic, the second rather sad, I posed the question: ?What do you want the audience to understand about this woman?? After a long pause, Karol muttered ?This is difficult!? But he came up with the following: ?Longing, she is longing for life, for love, for experience. There?s no tragedy, there is a happy ending?. ?OK? I replied, ?I?ve got it!?

I decided to limit the orchestra to strings and harps with prominent solos, particularly for viola and cello. There are several repeated themes: her longing,

her suspected schizophrenia, Charles?s engagement to Ernestina, cruelly broken, Charles?s developing relationship with Sarah culminating in one night of love and then she vanishes. Charles, now a broken man, after many years, locates her. She is now an independent artist and is ready for him. Like most film scores, these themes are broken into short sections but, almost immediately after the release of the film, I began to combine them into a whole piece. This is the most complete and contains all the relevant existing material.

My late friend, the writer and director Ronald Eyre told me how he met Anita Brookner at a party shortly after she received the Booker Prize for Hotel du Lac and she introduced herself saying ?I write sad novels?. And indeed, Brookner?s heroines seldom get their man. But I feel that her writing is in a direct line from Jane Austen, re-working similar themes ? men, marriage, the heart versus mind.

This new Nocturne is one long movement, mostly slow and very romantic. The original scoring was a trick one, featuring a small orchestra with synthesizers, but effective on T.V.

I wanted to develop it further ? I arranged and rescored the themes, more or less as they occur in the film. What was a prominent guitar solo evolved into a grandiloquent piano solo. The classical alto saxophone solos were retained from the original score.

The dramatisation of classic novels has been part of television output since broadcasting began. But Pride and Prejudice was different ? Alan Yentob, at a celebratory reception, declared that the series changed the public?s perception of the BBC and indeed an unstoppable flow of adaptations emanated from all channels in the years that followed. I put my period hat on as 1810 was the year we focused on. I had previously been interested in the novel as a ballet subject so knew the book quite well when discussions began and some of the sketches found their way into the third movement of this short suite.

The theme of the first movement is the opening of each of the six episodes, but the first episode, introducing the Bennet family one by one, gave me a chance to write an extended piece at concert length which has become my calling card and was also used for the title music of a BBC Radio

Series Carl Davis Classics. Whooping horns and virtuoso piano runs announce that wit is going to play its part in the proceedings. A more legato theme follows and that gave me the basic material for the score. Movement two introduces two grotesques. Canon Collins, a dangerous suitor for Elizabeth Bennet’s hand, is given a jocular gavotte featuring the bassoon. His patroness, the haughty Lady Catherine de Bourgh, is rather Handelian. She is definitely out of an earlier age, musically as well as mentally.

The third movement deals with the love story of Elizabeth Bennet and Mr. Darcy. Those unfamiliar with the story might be surprised at the quote from Mozart?s The Marriage of Figaro, Cherubino?s Act II aria Voi Che Sapete! It was one of the many imaginative touches of Sue Birtwistle ‘ she suggested that Elizabeth play the melody while visiting him at his family estate of Pemberley.

CRANFORD and THE RETURN TO CRANFORD

The CD concludes with an extended suite drawn from both Cranford and The Return to Cranford. This portrait of an enclosed rural society in mid-19th century Lancashire threatened by the intrusion of the railways proved to be, thanks to superb scripting and casting, very attractive. Mrs Gaskell turned to her family?s past, a village dominated by genteel if somewhat fierce ladies, and wrote a memoir in the form of a novel that seems at first rather precious but ultimately charming and moving. The music for the local aristocracy?s annual f?te is as grand as it can get (tracks 13 and 14). The little polka (track 15) is for an exotic parrot who lives in a hoop skirt. Track 16 is a portrait of the onestreet town and its Amazonian ladies. (Track 17) ? A Pair of Funerals ? Matty?s housekeeper, died in childbirth and mourned by a few and Lady Ludlow, died of brittle bones and mourned by all. Then the excitement of the annual Mayday celebrations (track 18), complete with the Green Man. The finale (track 19) is derived from one of the many satellite stories Mrs. Gaskell wrote by way of extending the range of her Cranford franchise, the trials and tribulations of the courtship of Sophie, the Vicar?s beautiful daughter and a new, young doctor. The climax of their tale is Sophie contracting and recovering from typhoid fever. The movement ends with their wedding and Miss Matty?s wonderful description of their society: ?Such a fine, close weave?.