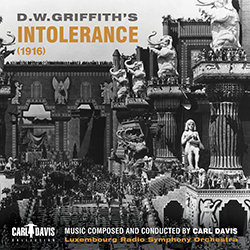 How exciting to revisit this recording made in Luxembourg in 1986 as a soundtrack for what was then the ‘Thames Silents’. The team of directors and producers, Kevin Brownlow and David Gill and myself were delivering up to three restorations of full length feature films a year and I was about to embark on the 1925 ‘Ben Hur’ score as soon as I had finished ‘Intolerance’.

The recording of the score followed two live performances of the film with the RTL Orchestra so they were more than ready. The main ‘Intolerance’ theme which spanned the entire 2 hours 40 minutes score had already passed into the orchestra’s history – it was hummable and quoted at times of stress.

Since the initial burst of performances in Leeds (its premiere), London (The Dominium) and Luxembourg, there have been performances in France and Germany as well as in New York of its recent re-issuing on DVD with remastered sound and new material from the Library of Congress. Performing the score to this extraordinary film is always challenging but deeply rewarding. The film’s theme has never dated and the international crises of 1917 (the film’s first release) are as relevant today in 2018. When will we learn?