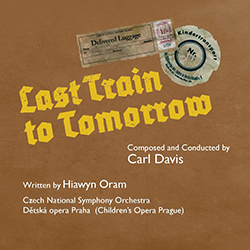 In 2009 the Hallé Orchestra of Manchester approached me to write a work for their whiz-bang Children’s Choir. My answer was an immediate ‘yes’ and an idea followed swiftly. I had in mind the underlying theme of the Kindertransport Movement of
1938-39 – children abandoned and saved by a quirk of history. The shape of the choir stalls at Manchester’s Bridgewater Hall seemed to echo the dimensions of a railway carriage. When filled with a hundred or so children it could recreate the critical scenes from the Kindertransport story – the rescue by train from three key cities, Prague, Vienna and Berlin, of thousands of Jewish children from inevitable death at the hands of the Nazis, to safety in England.

How to tell the story? Spoken narrative seemed obvious but perhaps a more original way would be to have the children themselves tell what happened to them. I turned to an experienced writer of children’s books, Hiawyn Oram, who had previously collaborated with me on musicals and songs specifically for children to perform. We were both very moved by the story and at times could barely talk about it for emotion but we both set to work reading purposefully the many accounts written by survivors.

What evolved was a sequence of songs (we looked carefully at Schubert’s song cycles) each of which moves the story further along. The events that preceded the train journey from the three cities to London’s Liverpool Street Station are told in flashback, young actors linking the set pieces with historical context. The work ends with the arrival of the children at Liverpool Street Station as they face a new life in England.

Now what about the music? First, the sound; I wanted to limit the range of sonorities, a sort of black and white feel, so no woodwinds or brass. I chose strings, percussion and piano four hands – the stark line-up present in many interwar concert works. And the style? I thought of what music the children might know from their life before the journey. Of course they would have heard, and the older children played, the classical masters but also the popular music of the day, sometimes rather Broadway-ish, as well as Jewish songs, hinting at tragic separation and tempered with humour and I knew the work had to end optimistically in a major key. After all, thanks to the British, these children were saved from the camps, a cause for celebration.

After the Manchester premiere in 2012, the second performance was in Prague in 2013. The orchestra was the Czech National Symphony Orchestra and the choir, the Children’s Opera Prague. The work was translated into Czech and brilliantly sung and staged. Following a hunch I asked if they sang in English. ‘Yes we can’ was the reply and I then decided that there might be an additional level of authenticity in recording the ‘Last Train…’ with them, Czech children singing in English.

Carl approached me in 2009 after the Hallé Orchestra had asked him to conceive and compose
a work for their Children’s Choir. His chosen subject was the Kindertransport Movement of 1938-39
and it was going to need words, he said, spoken and sung. I knew little about the subject but in the first weeks of researching, reading personal accounts and watching a remarkable Academy Award- winning film, ‘INTO THE ARMS OF STRANGERS,’ I became so distressed that I was on the verge of saying I couldn’t do it. I pulled myself up and together, over many months during which I discovered he was equally disturbed by the survivors’ stories, we managed to get our emotions sufficiently under control to create what has become LAST TRAIN – a dramatic narrative for Children’s Choir, Actors and Orchestra. It was a charged and wonderful experience working with Carl. His innate sense of theatre and the language of his composition and orchestrations add levels and meaning to words and story which can take the breath away. Tears may have been spilled writing LAST TRAIN but nothing can come close to the suffering of the young people who survived Nazi persecution and sudden separation from their families. I only hope we’ve captured something of it in this re-telling.

In 1994 I was commissioned by the Simon Wiesenthal Foundation in Los Angeles to compose a score for Arnold Schwartzman’s documentary film ‘Liberation’, a follow-up to his 1991 film ‘Echoes That Remain’: there was only one problem – due to the production schedule the film would not have completed editing before my already booked recording sessions in Ljubljana. I fell back on one of my favourite devices, that of creating a library, a series of mood pieces reflecting all aspects of the subject i.e. I was composing for a film yet to be created.

I enjoy working this way in that I have the freedom to interpret the historical themes without being forced into a specific time frame. It also means that instead of being a series of short cues, explicable only with pictures, I can compose complete movements. With the exception of combining a few cues I had a ready-made suite to hand over to the editing team and I could draw inspiration directly from the story: World War II with a particular emphasis on the Holocaust.

1. Overlord – A positive major key sense of aspiration and drive with a thoughtful middle section. It is used for both the opening titles and the Allied invasion of Normandy in June 1944.

2. Annihilation – Using a slow minor key the pictures represent the misery of the Nazi occupations and the growing awareness of the agenda of the Nazis to completely destroy the Jews of Europe.

3. German Aggression – This movement consists of a quasi-marching song illustrating the relentless expansion of the Third Reich and an aggressive multi-metered attack by land and air.

4. Massacre of Children – In the style of a Yiddish lullaby and in a slow minor key, the theme is passed gently around the orchestra.

5. Gathering Forces – In the meter of Holst’s ‘Jupiter’ the forces gather in England. The United States, Canadian and British armies prepare for the coming invasion. The mood is relentless.

6. The Death Camps – As the Allies advance on both fronts, the two themes of the film come together. The largely hidden story of the death camps is now revealed. In my heart of hearts, I have always felt that the camps cannot be underscored. Any music at all immediately softens their total nullity. Therefore very little of this movement is used in the final cut. But still, I had to try.

7. Finale: Liberation – Heard over a long end roller, I attempted to create a mood of resolution. After all, there was a moment when the war in Europe decisively ended. So, a warm D major and a sense of new beginnings starting with an extended unison string melody, concluding in a chorale-like manner.

La Marseillaise – An adaptation of Berlioz’s exciting setting of France’s National Anthem. It is heard as Charles de Gaulle walks confidently through the streets of a newly liberated Paris.

Rule Britannia – A fully orchestrated adaptation of Arne’s famous tune, over images of Churchill on the balcony of Buckingham Palace on VE Day.

Hatikvah – The Israeli National Anthem played over a reading of the poem ‘The Shoes of Treblinka’ by Mosche Shulstein.