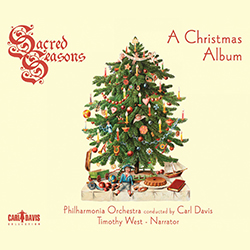 The celebration of Christmas in music can take many forms: traditional carols and hymns comprise an early contribution, but the holiday is also heavily supported outside the church – in the concert hall, film, opera, musicals, dance, pop and at home. This CD brings together some of these elements as well as related works.

A CHRISTMAS CAROL – Ballet Suite
The Suite from A Christmas Carol ballet was created in 1993, the ballet itself in 1992, a follow-up to A Simple Man, commissioned by the Northern Ballet Theatre. It consists of four movements depicting different aspects of the story. In the first movement, based on the carol We Wish You a Merry Christmas, Scrooge’s nephew and niece invite him to their Christmas dinner. He vigorously rejects the offer, the brass blare out, “Bah, humbug!” and he rudely pushes them out of his office. The second movement is a portrait of Bob Cratchit – Scrooge’s kindly clerk. In vain, Bob tries to warm himself on one live coal and dreams of spending his Christmas in the bosom of his family. The third movement is part of the Christmas Past flashback. Young Scrooge is already exhibiting signs of his meanness, which alarms his fiancée, Bella. Sadly, she breaks off their engagement and returns his ring. The fourth and final movement returns to the present – the appearance of Marley’s ghost (his former business partner). Marley drags a heavy load of chains, representing his guilt, as the stage fills with fellow ghosts, waltzing maniacally.

THE NATIVITY STORY (Based on Carl Davis’ score for Ben Hur – 1925)
I scored the 1925 MGM Ben Hur in 1987 as part of the Thames Silents’ series. The film’s restoration with its new score was premiéred at the London Palladium and later recorded by the London Philharmonic Orchestra. The first 15 minutes of the film contained a visually beautiful telling of the Nativity Story. In later years, searching for fresh material for Christmas concerts, I thought of re-working this segment and adding a narration taken from the Gospels to replace the visuals and put the music into a context, i.e. what the music was meant to represent. The distinguished actor, Timothy West, came to mind as a superb reader of text (I had provided many theatre scores for him) and immediately asked him to record for me. Musically, I took a controversial line, choosing Luther’s Dresden Amen as a major motive for the entire film. This follows a pattern already set by Mendelssohn and Wagner, for a subject steeped in religious symbolism – it seemed right.

EINE KLEINE BACHMUSIK
Most children study these short and charming keyboard pieces composed by Bach as lessons for his second wife, Anna Magdelana. It consists of two Marches, Nos. 16 and 18; a Musette, No. 22 and two Minuets, No. 5 in G Minor and No. 4, the famous Minuet in G. They combine to form a tiny suite.

SERENADE OF CAROLS (in four movements for small orchestra)
Morton Gould achieved double fame – a prolific American composer (his score for the ballet Fall River Legend lives on in the repertoire of Ballet Theatre and the Dance Theatre of Harlem). I thrive on his many arrangements, particularly of Christmas music. I heard Gould’s recording of the Serenade on the radio in New York shortly after he recorded it in 1949. Looking for suitable repertoire for concerts led me back to it as filler for promotional concerts for Kiri Ti Kanewa’s Christmas with Kiri L.P. for Decca (1985). Gould provides a seamless flow of a counterpoint in each of the varied movements. The shape is symphonic, a stately first movement, a scherzo-like second movement, a slow third movement, and a stirring finale. The orchestration is equally ingenious – an octet of strings plus double bass, two harps and a small group of winds and brass, numbering 24 soloists in all.

SACRED SEASONS
For me, Bach is always the centre of sacred music and I have conducted many transcriptions over the years and have introduced Bach into several film and television scores. Now, I wanted to present a fresh concept, to relate them to specific seasons and see them as a basis for dramatic treatment. The first, WINTER: Pilgrims, is based on the chorale Wachet auf, ruft uns die Stimme or Sleepers Awake! Cantata No. 140. I extended the overall length of the original, imagining a Pilgrim band, heard from a great distance, approaching centre stage and gradually vanishing. The second,SPRING: Angelic Dance, is derived from the popular Sheep May Safely Graze from the secular cantata Was mir behagt No. 208. Here, I have discarded the original accompaniment for Vivaldi-like pizzicato strings and the soprano solo replaced by a baroque (style) trumpet. The atmosphere should recall Botticelli’s Primavera. The third, SUMMER – Rite is based on one of my favourite songs, again from the Anna Magdelena Notebooks, Bist du bei mir! In dance terms, this would be the adage. For the fourth movement, AUTUMN: Gathering In, David Matthews composed to order, a short transition to take us to the famous Jesu, Joy of Man’s Desiring from Church Cantata No. 147 Herz und Mund und tat und Leben. My joyous finale, evoking Dame Myra Hess’ piano transcription, one of my favourites to play as a young student, attending a concert of hers in Boston in 1955 and then in my English life, Dame Myra performing during the Blitz at the National Gallery in London.

PRAYER from Mozartiana (Suite No. 4), Tchaikovsky Op. 61
A transcription of a transcription – Tchaikovsky’s orchestration of Liszt’s transcription for organ of Mozart’s ravishing Ave Verum Corpus. I was searching for a fitting close for this very varied collection and decided to end contemplatively.