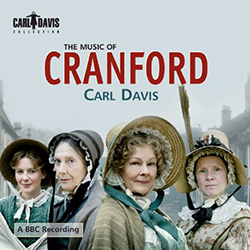 I was no stranger to Cranford when I heard rumours of the BBC production in 2007. In 1975 John Wells and I had written a musical based on the subject for Stratford East, later televised by Thames Television. But much time had elapsed and I had established a strong working relationship with Producer, Sue Birtwistle, providing scores for her productions of Hotel du Lac (1986) and Pride and Prejudice (1995). But Cranford was a different animal. Set in a small Cheshire town dominated by strong-minded women, it held itself apart from the unstoppable thrust of the industrial revolution until the railway literally drove through it. The old cusoms of garden fetes at the local stately home and Mayday remained but the lives of the wonderfully eccentric ladies who were old enough to have known the end of the 18th century were profoundly changed.

The years is 1841, Victoria was on the throne, and the music was at the height of the romantic period of Schumann, Mendelssohn, Berlioz and even the young Wagner. The great cities of Manchester and Liverpool were about to form their orchestras: the Halle and the Liverpool Philharmonic. However, this was far from the world of Cranford, Mrs Gaskill’s pseudonym for Knutsford. Local music was a small town band, the church and home music-making. However, a score for this both comic and moving story had to account for the emotional lives of the characters and help tell their tale.

Cranford is a one-street town and this road brings all the populace in and out. The flowing motion gave me the concept for the title theme.