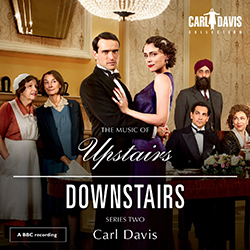 From series two of the 2012 production.

This highly successful 1970’s series was revived for the BBC in 2011 and given a second outing in the spring of 2012. I was given the opportunity to score this latter six-parter which covered the period 1937-1938 in the fortunes of the aristocratic family occupying 165 Eaton Place in one of London’s swankiest neighbourhoods, Belgravia.

The excellent original theme by Alexander Faris (who, by the way, conducted my first opera The Arrangement in 1965) was a must for the revival of the series and is now heard in the context of 1937, when the music was a far cry from the rum-ti-tum of Edwardian London. We are now in the “Swing Era” with the strong influence of American popular music everywhere – where radio, records and sound movies were readily available. Big and small jazz bands were recorded and broadcast extensively. Music was literally “in the air”; the directors and the producers of this later series responded to that and requested an abundance of music.

The original title music was rapidly converted from a genteel waltz to a big band foxtrot with jazzy orchestrations. I helped myself to foxtrots, rumbas and sambas for scenes with any hint of background music as well as actuality scenes shot in nightclubs, balls and even a fashion photoshoot. The dangerous aristo-spy, Lady Persephone, was provided with a seductive tango. Classical references are made in Lady Agnes’ maternal feelings for both house and family in a modal theme while the power struggle between the butler and the cook is delineated in a cocky march alternating with a nostalgic waltz, whereas Aunt Blanche’s Sapphic affair has a more elevated Gluckian tone. Our driver and parlour maid are served by variety-style down-to-earth themes, and a pop ballad romantic melody.

Finally, the War – the two years preceding the outbreak of World War II contained some of history’s darkest chapters: the Appeasement Policy in the face of Germany’s annexation of Austria and Czechoslovakia. The destruction of Jewish properties and synagogues and the pacts between Germany, Italy and Russia are understood fully by Lord Hallam and form a substantial part of the story. Musically, underscoring was needed to screw up the tension in the face of the inexorable march towards war. The refugee crisis and the Kindertransport are enacted and form two vocal tracks, Lotte’s Song Oh Ladybird arranged from a Brahms folksong transcription and an inspired idea of author and producer, the amazing Heidi Thomas, Holst’s Jupiter-derived hymn I Vow to Thee my Country sung by a girls’ choir to greet the newly arrived children of the Kindertransport to England.

The series ends with the sounds of an air-raid warning. The events of World War II run throughout my career from my first documentary film score in the early 1960s “DP” which concerned Polish displaced persons, to my latest composition The Last Train to Tomorrow, a musical narrative set during the journey of the Kindertransport. The vastness and range of experiences of World War II are such as to provide new memoirs and discoveries virtually every day. The concrete evidence is there. Perhaps we today can only try to understand through artistic endeavour what it was like to be there.