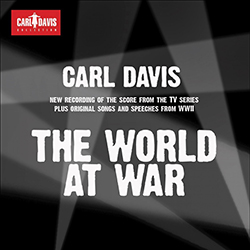 New recording of the score from the TV Series. Composed and Conducted by Carl Davis. Plus original songs and speeches from WWII

Thirty years after the creation of THE WORLD AT WAR TV series, I am once more staring at the enormous pile of music composed for this project. In the event, I decided not to “improve” on what was done, but let it stand.

The four symphonic movements arranged for the 1973 Decca album proved to have a very interesting orchestration – no flutes, no trumpets and no harps – rather austere – I liked it! But what of the rest? Sifting through the twenty six episodes in their brown envelopes, I found mostly short pieces but with the occasional longer cue. The third episode, the fall of France, seemed to me particularly cohesive and I thought it would be of interest to have at least one complete episode and this was one where the score seemed to tell the whole story. I had two other aims even before I opened an envelope, to record the Mazurka I wrote for the Polish Ghetto uprising, and an extended sequence called “Turkey Shoot”, describing the flight patterns from an aircraft carrier in the Pacific and the long wait for the return of the plane and crew.

There was a peculiar aspect to recording this score in Prague. The World at War series had such a global spread, forcing me to think of where, stylistically, the title theme should be placed. I decided to give it a Czech flavour, thinking that this country was one with democratic aspirations, seldome achieved, and was placed strategically between East and West.