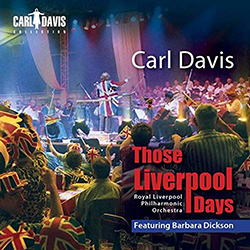 In 1983, I was asked by the Royal Liverpool Philharmonic Orchestra to put together a concert with the music critic and author Brendon Carroll entitled SOUNDS OF THE CITY, sponsored by Radio City the principal commercial radio station of Liverpool. The evening hit all the right buttons of the day – television themes, The Beatles, The Scaffold, Willy Russell, football and my own score for the film CHAMPIONS the story of Bob Champion and his horse Alderniti set during the Grand National. The concert established me as a conductor/entertainer and led to the creation of the Liverpool Pops on the King’s Dock in 1993. At the height of its popularity, this CD was recorded, leaning heavily on the 1983 concert but with some new elements, like the McCartney sing-along ‘All Together Now’. The ‘Pops’ survived until 2000 – eight heady years! There were many innovations here for English musical life – much influenced by the Boston Pops, we had three short acts with tables and chairs in the centre area that became a social caché. There was music before and music after so that the public might be entertained and fed from 6 p.m. to midnight. Apparently, we had the longest bar in Europe! My style was very breezy, replacing the ubiquitous white jacket with colourful costumes which the public loved. The issue was that the broad public found it very easy and attractive to go into a Big Top rather than a concert hall. When the audience figures peaked in the late 1990’s, we were the most successful summer festival in the U.K. I wish it had not ended in 2000 but a lot was learned and a lot enjoyed. Listening to this CD again, puts me in mind of it all. Where else could one get an entire audience to join in a conga line accompanied by a full symphony orchestra? The orchestra and I continue to work together and we have done some really fun things. The collaboration with Paul McCartney led to Paul McCartney’s LIVERPOOL ORATORIO in 1991 with over 100 performances around the world in its first few years. The RLPO championed the revival of silent films with orchestra and toured the U.S. with Chaplin’s City Lights. For the spring of 2011 they commissioned a new work from me for their principal cellist Jonathan Aasgaard, a Ballade for cello and orchestra which will shortly appearing the Carl Davis Collection as well as an orchestral CD of The Beatles released in July 2011. This is a very happy and fruitful partnership – long may it continue.
Carl Davis, March 2011

About The Liverpool Pops
Early in 1993 it became clear to the Royal Liverpool Philharmonic that they had no place to play their summer season. Although the only orchestra in Great Britain to own its own concert hall, the building was in the throes of a massive refurbishment. Bob Creech, then Chief Executive of the Orchestra, had the inspiration of hiring a big top and placing it in one of the most striking venues in Liverpool, the King’s Dock. The choice could not have been happier, with its river site, the tent in bright blue and red colours with banners waving in the breeze. Our Big Top attracted, in its first year, an audience of 14,000 and in its second 25,000. Our success needed to be trumpeted to the world and in this tribute album we play our trump card – music written and inspired by the City itself and her glorious heritage of writers and composers.

You’ll Never Walk Alone
My New York background led me to think that You’ll Never Walk Alone had only to do with Rodgers and Hammerstein’s hit musical ‘Carousel’. My years in England showed me another use, that of the Liverpool Football Club anthem sung by the standing crowds in the area known as ‘The Kop’. We start with symphonic storm, out of which develops Rodgers’ stirring anthem.

A Lancashire Overture
With a clever arrangement written by Barry Forgie A Lancashire Overture catches in its net many characteristic Liverpool tunes. Starting with our first Beatles song, Get Back, Barry goes on to weave the television theme for Z Cars with On The Mountain Stands A Lady and the folk song The Big Ship Sails On The Alley, Alley, O with The Liverpool Lullaby (Oh You Are A Mucky Kid) made famous by Cilla Black, into a fine old climax.

Imagine
‘Imagine’ is one of the finest pleas for peace to come from John Lennon, made even more memorable by the image of him and his wife, Yoko Ono, performing the song in a white room wearing white clothes and playing a white piano. This vision of serenity is recaptured by Tommy Williams’ angelic treble.

A Hard Day’s Night
We go back to The Beatles in their heyday with a clever arrangement by Barry Forgie of the title song from Richard Lester’s film A Hard Day’s Night. It starts extravagantly with the theme played on four flugelhorns.

A Scaffold Tribute
One of my favourite groups of the 60’s was The Scaffold, and in particular the poetry of Roger McGough, one of its three members. No representative Liverpool album could be without the jolly melodies of their three hits Do You Remember, Thank U Very Much and Lily The Pink.

Easy Terms
Sometime in the early 80’s my wife, Jean Boht, and I were seated in the Lyric Theatre on Shaftesbury Avenue in London for a performance of Willy Russell’s new musical ‘Blood Brothers’. Within three minutes of the show starting we were collapsed in tears by Barbara Dickson’s moving rendition of Easy Terms. This study of social inequality is summed up in this song and was made particularly memorable by the performance of Barbara in the leading role. I am thrilled that she is repeating her performance of ‘Easy Terms’ on this album, as well as the song from ‘Educating Rita’.

Champions Suite
My own personal contact with Liverpool was to compose the score for the film ‘Champions’, the heroic story of Bob Champion, the steeplechase jockey and his horse, Aldaniti. Both were struggling with near fatal illness and injury but recovered and went on to win England’s premiere racing event, the Grand National at Aintree Park in Liverpool. The four movements reflect their heroic story and feature the eloquent piano playing of Lucy Parham.