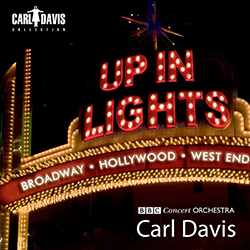 The recording sees Davis conducting the earliest of his musical obsessions, songs from the stage and screen. From Richard Rodgers extraordinaryCarousel Waltz to Jascha Heifetz’s notoriously hard-to-play arrangements of Gershwin’s Porgy and Bess, Davis takes a starry look at Broadway, the West End and Hollywood. His work on the original 1980 Thames TV Hollywood series is represented by the Hollywood Theme and Keystone Kops. This CD also premieres a new Cats Suite, arranged by Sir Andrew Lloyd Webber’s principal orchestrator, David Cullen.

Carl Davis has always been fascinated in music for theatre and film. Aged four, it was film when he saw the nightmare-inducing Disney’s Three Little Pigs and the even more terrifying Snow White and the Seven Dwarfs. Most defining for him was Fantasia. By now aged seven, he was intoxicatedparticularly by the Bach/Stokowski Toccata and Fugue with its abstract patterns. Determined to play it, despite only notching up three piano lessons, he was furious when his teacher quite rightly refused to teach him and he insisted his parents sack him. They didn’t.

Davis’s first experience of a Broadway musical was on what was called the “subway circuit”. These shows had finished their Broadway run in Manhattan and would then tour within New York City, in this case a grand picture palace called the Flatbush Theater. It was there, aged 8 that he saw “On the Town” with its original Broadway cast. It was a powerful experience – the spectacle, the fusion of dance (with Jerome Robbins at his youthful best), the originality of the score, the ingenuity of the fluid sets, the non-stop pace and energy of the playing in the pit as well as on stage. As Davis says ‘It was Grand!’.