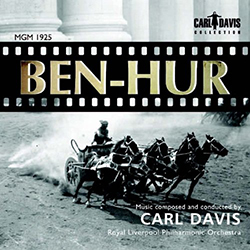 OPENING TITLES – When I came to write the score for BEN-HUR there seemed to be more value in and more screen time given to the story of Jesus than I had remembered from my previous impressions of the film. (l had composed music for clips from the film for the Hollywood TV series).

The first problem to solve was the music for these sequences which were statically and rather reverentially staged, almost in picture-book or tableau fashion. I decided then to treat this part with immense seriousness and to establish the biblical theme as the main theme for the entire film. I needed a Straussian ‘Natur Tema” to run right through the score which would have a primitive, basic, tonic- dominated feeling. I also thought that it would be necessary to quote a well-known part of the liturgy and I chose the simple phrase which is known as The Dresden Amen. These two elements form the Opening Titles. An extra dimension is given to the already large symphony orchestra with the use of organ. It is therefore apparent that I am employing the Wagnerian system of ‘leitmotifs’ in this score – themes are used for individual characters and events as the story unfolds.

2. THE NATIVITY – The Cave of David / Star of Bethlehem / The Adoration of the Magi
Here I develop the ‘Natur Tema’ in the scenes depicting the birth of Christ. There is a spectacular extra-terrestrial display, climaxing in the appearance of the star over the town of Bethlehem. As the three wise men present their gifts a new theme appears in the form of a cradle-song, played by the strings.

3 ESTHER AND THE YOUNG PRINCE
The story has now moved on some twenty years to the holy city of Jerusalem. We encounter a new cast of characters: Ben-Hur, a Jewish prince, who lives in grandeur with his mother and sister; Messala, a childhood friend of Ben-Hur who has become a Roman army officer, recently posted to Jerusalem as an attendant to the new governor, Gratus. There is also the faithful retainer to the Hur family, Simonides and his beautiful daughter Esther. As Ben-Hur is strolling in the market place there is the very first statement of the Ben-Hur Theme. Esther is seen buying a white pigeon. The bird escapes but is retrieved by the young prince. The couple meet and it is ‘love at first sight’. However, Ben-Hur does not realise that she is the daughter of Simonides as he has not seen her since their youth. She must return to Antioch with her father but they pledge to meet again. The love theme for Esther and Ben-Hur is now established.

4. ROMAN MARCH AND DISASTER – Gratus / Entry into Jerusalem / Storming the Palace and Arrest
Ben-Hur encounters his old friend Messala. They quarrel bitterly when Messala suggests that Ben-Hur should renounce his Jewish faith and become a Roman. They part as enemies. At that moment the governor’s procession enters the city and all of the Hur family gather on their parapet overlooking the street. It is then that an unfortunate accident occurs – Ben-Hur loosens a tile which falls and kills the governor. Messala and his men storm the palace and arrest both Ben-Hur and his mother and sister. Ben-Hur is immediately sentenced to the life of a galley slave, while his family are dispatched to the catacombed prison which lies beneath the city. The music builds gradually, a portrayal of the might of the Roman Empire. The music in the scenes of the arrest and banishment of the Hur family is purely descriptive of the action and of the variety of emotions that ensue.

5 GALLEY SLAVE
Ben-Hur is dragged through the desert to the sea and his servitude on the Roman galley (On this journey he is given water to quench his thirst by a carpenter in the village of Nazareth). This whole cue reflects the feeling of humiliation and bitterness that Ben-Hur has, especially against Messala. The hortator on the galley beats out the rowing stroke on a primitive drum. In live performance there is always the problem of synchronising his on-screen blows with that of the large bass drum in the orchestra. The sound of groaning oars is also reproduced by having the bows of the double-basses glissing across the strings.

6 PIRATE BATTLE
The Roman fleet is attacked by pirates, led by Golthar the Terrible. The galley slaves are chained together, except for Ben-Hur whom the commander of the fleet, Quintas Arrias, has taken an interest as he admires his spirit and courage which he says is “like a Roman’s”. The fight is violent and very grisly, so the music is suitably savage and barbaric. In the midst of the battle Ben-Hur saves the life of Arrias and his theme and the Roman Theme are heard in counterpoint.

7 IRAS THE EGYPTIAN
The commander’s galley is sunk in the naval battle. Ben-Hur and Arrias are cast adrift on the open sea. They are rescued and learn of the great Roman victory, thanks to the final command of Quintas Arrias. They return to Rome in triumph where, as the adopted son of Arrias, Ben-Hur becomes a famous charioteer but despite his new prosperity he cannot forget the loss of his family. On hearing of the old merchant Simonides, Ben-Hur travels to Antioch to learn more about the fate of his mother and sister. There he is informed that they are both dead. (In fact they have survived in prison but have contracted leprosy). A great chariot race is to be held in Antioch the next day. When Ben-Hur learns that Messala has entered, he is persuaded by Sheik llderim to race the Sheik’s team of white stallions against his former adversary – although Ben-Hur insists upon being entered as an unknown competitor, Messala uses his glamorous mistress lras to try and find out the identity of the mystery man. She attempts to seduce Ben- Hur at the Sheik’s banquet but he rejects her advances. She later overhears Simonides greeting Ben-Hur as – the Prince of Hur – and reports this back to her master. Simonides declares himself to be in fact a slave of the Hur family who has been guarding their fortune over the years. With this music I have tried to evoke the world of French Orientalism: overlush and erotic with rich, complex and glittering orchestration. Midway through the banquet we hear the motif of the race as the Sheik’s horses are paraded before the guests.

8 THE CHARIOT RACE – The Gathering of the Chariots / The Race
Messala is stunned when he learns that Ben-Hur still lives. He foolishly stakes all his wealth against the new-found fortune of the Jewish prince. The music begins as the chariots enter the vast arena. The 9/8 rhythm of the race’s theme was inspired by the original Axt / Mendoza score of 1925 (They were two prolific film composers of that period). When the music is performed live l want the audience to be enclosed in a stereophonic effect, created by two full sets of timpani (8 drums) – one set on either side of the orchestra. In this recording we also tried to recreate this exaggerated stereo with alternating and competing timpani. When the race actually starts we have a symphonic development of The Race Theme. Messala’s Theme and The Ben-Hur theme. These various elements follow the screen action very closely with the momentum of the race never being lost. There is a crash and pile-up of horses and men at the end of the race. Messala is killed after locking wheels with Ben-Hur’s chariot. Ben Hur’s theme then appears in triumphant E-flat upon his victory.

9 BEN HUR’S RETURN – The Palace of Hur / Lepers
Ben-Hur raises an army to aid Jesus in the liberation of Palestine from the Romans. He leads his forces towards Jerusalem but first enters the city alone to visit his old home. There then follows a very poignant scene, Ben-Hur falls asleep outside the palace doors. The pitiful figures of his mother and sister wend their way across the city = having been released on a general amnesty by Pontius Pilate. They come upon the sleeping figure but dare not wake him. (The Family Theme is heard on a solo cello). In the morning when Ben-Hur awakens the women hide in the shadows. Esther appears and she and Ben-Hur proclaim their love for each other before he leaves to re-join his army. Esther hears the women crying but they warn her to keep away as they are ‘uncIean#! They force her to promise that she will never tell Ben-Hur that she has seen them. In this scene The Family Theme is in a major-key giving a sense of redemption and transcending. The ‘Leper BelI’ sounds, ending this movement on a note of grieving and desolation.

10 VIA DOLOROSA – The Way of the Cross / Miracle
Esther hears of the miracles worked by Jesus. She goes in search of the mother and sister in the Valley of Lepers. Jesus is sentenced to death and begins his journey to Calvary. The music starts with a massive funeral march for full orchestra, organ and timpani. In the middle section we hear Ben-Hur’s Theme when he stops the procession to tell Jesus that an army is gathered and ready to fight for his cause. The Dresden Amen re-appears as Jesus commands Ben-Hur to put down his sword. Violence is not the way to gain salvation. Jesus then comes to the spot where Esther has placed the mother and sister. His shadow falls across them. They are cured. Ben-Hur witnesses this and the family is tearfully re-united. A full statement of The Family Theme in C-major announces this. The music ends as we see the bloody footprints of the Saviour’s path to his crucifixion. Throughout the film we are never given a complete view of Christ – just a hand, an arm, or foot or a shadow – this was the code of the day for the portrayal of Jesus on the screen.

11. EARTHQUAKE AND NEW DAWN – Collapse of the Senate / The Resurrection
The finale of the film begins with a spectacular earthquake and the destruction of the senate building, collapsing onto the panic-stricken mob. The orchestra, organ and thunder-sheet make one of the loudest noises I have ever created. Sensitive players frequently cover their ears during live performances! The music dies away as the dust settles. A solo from the cello, going through four octaves, re-introduces the Opening Titles music and the final appearance of The Dresden Amen, in a very tranquil setting, as the saga ends.