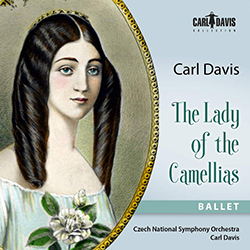 Recording of the 2012 ballet composed by Carl Davis

In 2008, I opened the stage door to the opera house in Zagreb, home to the National Ballet of Croatia and caught sight of a large poster announcing the Mia Slavenska Ballet Competition. I did a double take: Mia Slavenska was a famous ballerina, star of the Ballet Russe de Monte Carlo and had danced at the very first ballet performance I attended at the Metropolitan Opera House, New York when I was around 9 years old and already committed to what was to become a lifelong passion for dance. Coming full circle, my latest ballet ‘The Lady of the Camellias’, was commissioned by the company that had been home to its international star. Once more it was Derek Deane who made the call. When he mentioned the subject I immediately felt my temperature rise and remained in a fever for the two full years from the inquiry to the first night. I had a long build up of my own from childhood, listening to Verdi‘s ‘La Traviata’ on the Saturday afternoon Met broadcasts to later preparing a production at the New York City Opera. Still later, in London in 1978, I composed a score for a BBC dramatisation of the original Dumas Jr novel but in the intervening years there had been several ballets produced on the subject, mostly using music by Liszt and Chopin. Obvious, as the courtesan Marie Duplessis, that Marguerite Gautier was based on, had been mistress of both composers as well as the author ofthe novel and highly successful play. I pleaded with Derek to do an original score and re-studying the novel, was determined to include several scenes that Verdi had decided to omit, such as Marguerite’s friends freeloading at her country retreat and her final visit to Armand after her humiliation at Olympe’s party. With a contemporary concept to the decor, the action could flow without pause and indeed the production did effectively utilise projections and film. Here is our story.

Prelude
A prelude to the proceedings in 3 distinct sections, a brief, joyous gallop, a calmer theme which will return throughout the score to suggest Marguerite’s unease and longing, principally on strings and a more agitated passage depicting her growing panic and desperation.

Bailiffs and Memories
The curtain rises as the bailiffs are clearing the flat of furniture of the now penniless Marguerite. Attended only by her faithful maid Nanine and her doctor, she is in the final stages of tuberculosis. An ominous and dissonant funeral march pounds out its heartbeat rhythm. Abruptly the mood changes to a macabre waltz as Marguerite hallucinates her past. The principal characters of her life drift through to themes that will be developed later: Prudence her confidante, her inner circle of clients and hangers on, Armand, his dreaded father and her chief rival Olympe. On the reprise of the march, Marguerite loses consciousness.

Retour à la Vie
Prudence appears – time for work! A large mirror drops and she and Nanine begin to put Marguerite together – hair, makeup, dress. She is ready and steps through the frame. A whirling tarantella accompanies this ending in a glowing finale.

The Inner Circle
The opening Gallop bursts out as Gaston, the Baron and the Duke arrive ready for their night on the town. They shamelessly flirt with the two women and of course make a contribution to the household finances. The Gallop changes to a boisterous waltz interrupted by a resplendent Marguerite who sweeps them off to the theatre. The sitting room is transformed into a theatre with two boxes facing each other. In the centre we are in the final throes of Act 2 of Giselle. As Giselle disappears into her grave, Marguerite and Armand gaze at each other for the first time.

Sucrées aux Raisins
According to a mutual acquaintance, sugared raisins are the key to Marguerite’s heart and Armand duly turns up at her box with a paper bagful. She is charmed but plays the opposite to a flirtatious waltz. She is shrill and vulgar and leaves a shocked Armand alone.

I Will Have Her!
Armand is furious, the music stormy. Then his ire diminishes and he sees her sick and vulnerable, suggested by a plangent oboe solo. The music is lyrical, sympathetic and Armand feels more and more drawn to her.

Waiting and Hoping
While Marguerite is recovering, Armand waits every day outside her house and is observed. Finally his patience is rewarded and he is invited in. The music is a threnody, minor key in an attempt to convey her suffering. It turns major as she recovers and then excited with anticipation.

La Soirée
Chez Marguerite attended by the “inner circle”. The Baron has also invited Olympe, a stunning blonde. Marguerite is performing her party piece, Weber’s Invitation to the Dance. The guests begin to dance but she tires and stops. Armand approaches her.

Pas de Deux – Introductions
A conversation in dance – first, the string music from the Prelude, her uncertainty and dissatisfaction with her life. Then a new major key melody, a slow waltz – could this be the one?

Temps! Allez!
Prudence hustles the guests from the room to the tarantella which signals Marguerite‘s work time but musically builds to. . .

She’s Mine!
This is Armand’s dance of triumph, all major key and affirmative. At its climax Marguerite appears, bags packed for a journey. She is opting out and leaving Paris for a new life with her young lover in the country.

To the Country
To a jogging beat, the lovers pass through roads lined with silver birch trees. The theme of the “Introductions” is treated canonically until it dwindles out.

Pas de Deux – Silver Birches
We have now reached the central section of the 1st Act: a lengthy adagio depicting the life of the two lovers in their country retreat, happiness too complete to be believed. The duet begins excitedly but calms into a sustained and serene melody. Suddenly Marguerite falters and is insecure. Her questioning theme from the Prelude returns, now an outcry. However Armand reassures her and there is resolution as they leave the stage.

Layabouts
For a time the stage is empty. Slowly Marguerite’s friends from Paris, dressed in white, drift on. It’s their away day.

Déjeuner sur l’herbes
Led by Olympe, the party perform a sustained pavane. It soon hots up with the addition of African drumming. As the dance reaches a climax, a dramatic counterpoint occurs – Marguerite is confronted by Nanine, the cash box is empty. More jewels must be sold and Nanine leaves for Paris as the day trippers depart.

A Perfect Day
A brief interlude, the guests have departed, the atmosphere is calm, Marguerite is alone. The tone of the music darkens but it is nothing. She goes.

Monsieur Duval
The worst possible thing – Armand’s father arrives to persuade Marguerite to end her affair with Armand. The music is a passacaglia of growing tragic power. She resists, using all her persuasive skills. He uses a mirror, pointing out that eventually she will age and lose her looks and then lose Armand as well. The death march returns and she agrees on one condition, that he kisses her as a father would his daughter (a violin solo covering 3 octaves). He leaves her crushed.

A Little Do!
Every romantic ballet requires an extended waltz and a grand party at Paris’s newest star seemed the right place for one. Olympe’s sudden ascent in the absence of Marguerite also brought her Marguerite’s ex-lover, Armand. In Olympe’s sumptuous apartment, he slumps with depression, clutching Marguerite’s letter of dismissal. All of Marguerite’s inner circle are there readily having switched allegiance and all participate in the swirling waltz.

I Love a Soldier
As if performing a number from the latest opera-comique, Olympe steps out with the entire male corps de ballet in a lively march/polka featuring a tambour militaire.

La Variation d’Olympe
In a slow, sensuous valse lente, Olympe displays her assets and her jewels ending in a virtuosic display, reprising a passage from Marguerite’s Act 1 hallucination.

Le Retour de Marguerite
Borne on the arms of her admirers, Marguerite enters the room and Paris society, in a sustained string passage. At its end, she is presented with a huge and unfathomably expensive diamond necklace. Olympe is outshone.

La Variation de Marguerite
A more dignified version of Olympe’s solo. Halfway through she catches sight of Armand and is momentarily disconcerted.

Revenge – Czardas
Devoured by jealousy, Olympe drags Armand out on to the dance floor and performs a highly suggestive Czardas virtually under Marguerite’s nose. The brass rasp and whoop.

Alone
A solo in which Marguerite enacts her conflict: the necklace representing her old life or her true love. She despairs but the music is interrupted – Armand has entered the room.

Deception and Disgrace
A heavy waltz is played (again, from the opening hallucination). Armand appears friendly – maybe there is hope of a reconciliation. Suddenly the music turns violent, but no, it’s ok. Then Armand calls the party guests in to witness Marguerite’s final humiliation. He flings his gambling winnings in her face and denounces her. Her former friends find this hilarious and abandon her.

Pas de Deux – The Last Rendezvous
Marguerite, running a high fever, decides to pay Armand one last visit. She knows she is dying and that he is indifferent but nonetheless she pleads for one more night of love, a night he will never forget.

The Death of Marguerite
The questioning theme in its most insistent form rings out leading to an extended version of the death march. This is her final illness. She remembers the good times, the gentle waltz and a wistful version of their last night. The end is serene, she dies calmly, in C major, pianissimo.