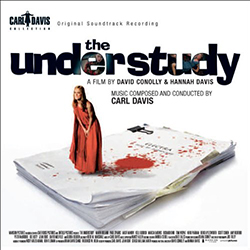 The Understudy is a 2008 black comedy from British duo David Conolly and Hannah Davis and is their second feature-length film.

Wherever you walk around New York, jazz is the underscore. That was my first tip from the Director and I took the point! I have a fearsome nostalgia for the cool jazz of the 1960s and gave it full vent in the first half of the film when the plot has an upward trajectory. Jazz has drive, energy and non-stop rhythm, but that is not the full story. The Understudy has numerous twists and turns reminiscent of a Hitchcock thriller. I imagine that the film Rebecca sees in the first reel might be Vertigo and took it from there. Definitely strings I thought… with the score following the highs and lows of the drama… a minor key waltz for irony and for the feel-good factor, the La La La Song, sung by the superb Mary Carewe for the climactic moment when suddenly everything seems to be going right.

Two other elements make up the score: some timpani taps and quasi-Greek clarinet moans provide the incidental music for the Off-Broadway production of Electra and finally, music for the character I play, Mr. Davidovitch. Mr D. is a chronic tenor saxophonist, whose doleful tones drive his wife crazy! His jazz improvisations become happier, as we imagine him serenading her corpse! A bit of family history – my maternal grandfather had been a Cantor in the Old World and occasionally at family gatherings, sang Massenet’s Elegy with Hebrew text. The Elegy is recalled in Mr. D’s first piece. The jazz score was recorded in London and the orchestral sections in Prague. I found myself conducting to a screen which showed me playing it back. The musos were amazed!